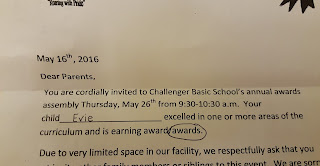 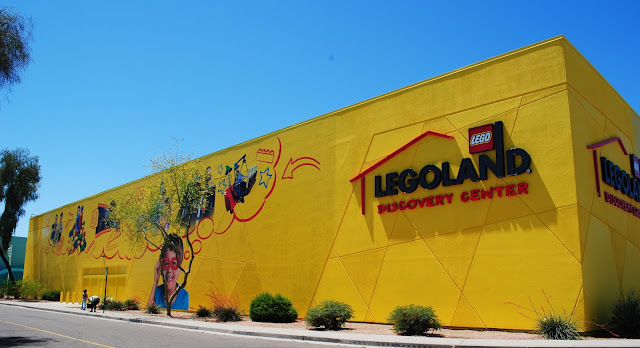 If you live in Arizona and have kids who are crazy about LEGOs, they probably are itching to go to the LEGOLAND Discovery Center in Arizona Mills. As a parent, of course you want your kids to experience and have fun on this newly opened place. At the same time, you're mostly wondering about the cost ($22/person for a one day pass) and its worth.

The link below is a review I want to share that my husband wrote. This review provides pictures of what you will see inside and things you and your kids can do. Hopefully this will help you decide whether to get a one-day pass or an annual pass.

LEGOLAND Discovery Center Arizona Review
Posted by Riza at 9:09 AM No comments:

My daughter's teacher hosted quite a fancy Mother's Day Tea in their school last week. She created and sent each mom in her class a pretty, cut-out teapot invitation. A request to wear our favorite tea party hats was a nice touch to make the party fun, special, and fanciful! 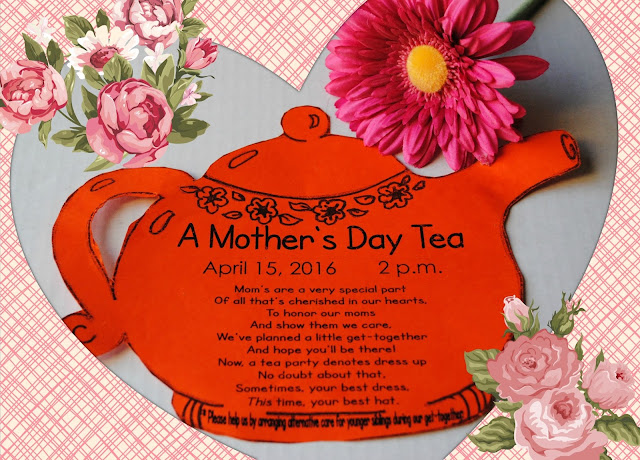 When I arrived at the venue, I was greeted with chit-chatting, pretty moms wearing their elaborate hats. Couldn't help but smile and felt so special when my eyes grasp the fabulous table setting, filled with fancy tea pots, cups, plates, and flowers. 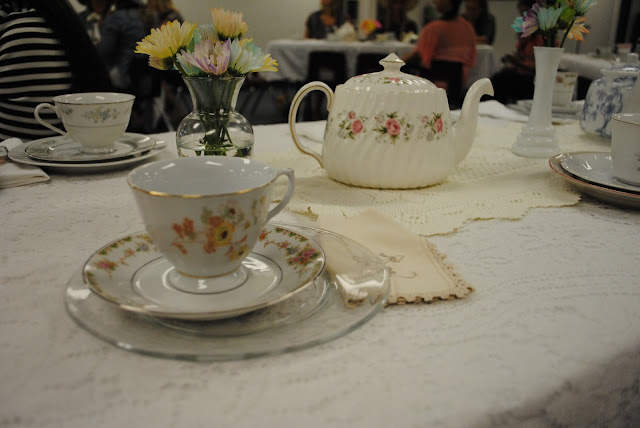 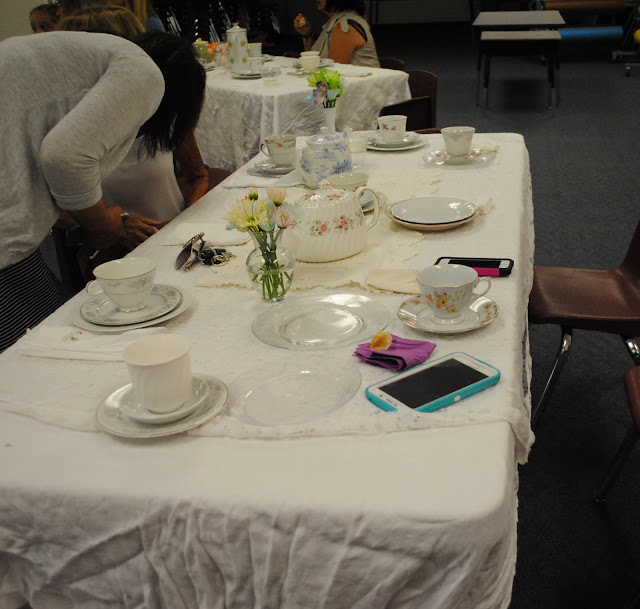 The buffet table was brimming with delectable, sweet and savory finger foods, and thirst-quencher lemonade, donated mostly by the parents. 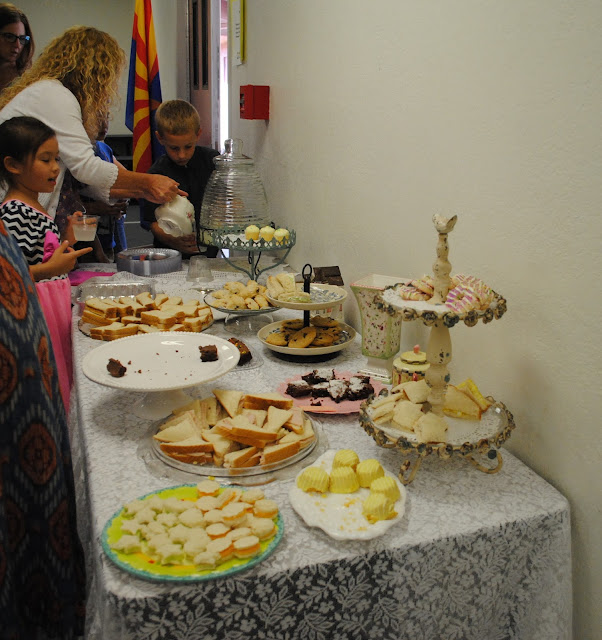 Moms had a little bit of hobnobbing with each other while waiting for the kids. The room became quiet when one after the other, our first graders walked into the room in line. They immediately proceeded to the stage and performed a short, yet heart-melting program for the moms. My favorite part was when each student came forward and tell everybody the reason why he/she loves his/her mom. 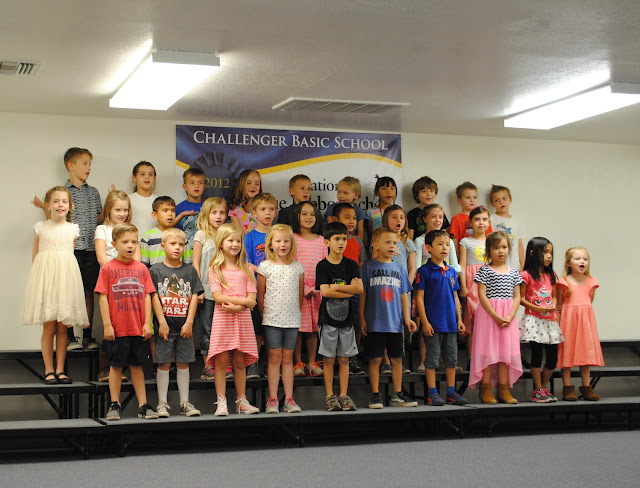 Refreshment for everybody followed after the program. A beautiful sight to see moms and kids spending time with each other in one room to honor the beauty of motherhood. 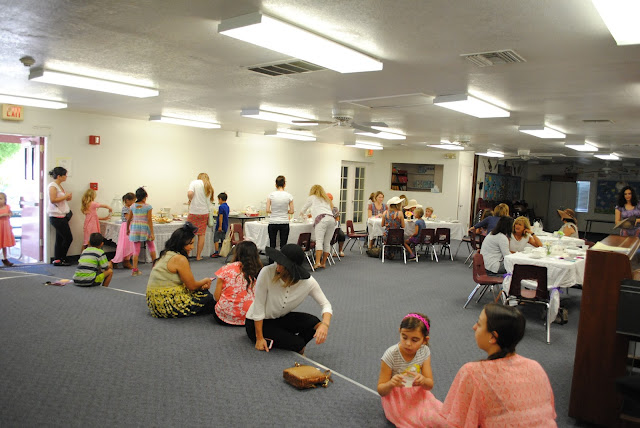 The effort my daughter's teacher put into all of what was prepared was very touching. It looked like, she's the only teacher in their school doing it. How cool and admirable that kind of teacher is? I give all my commendation and salute to Ms. Fredette! Job well done! 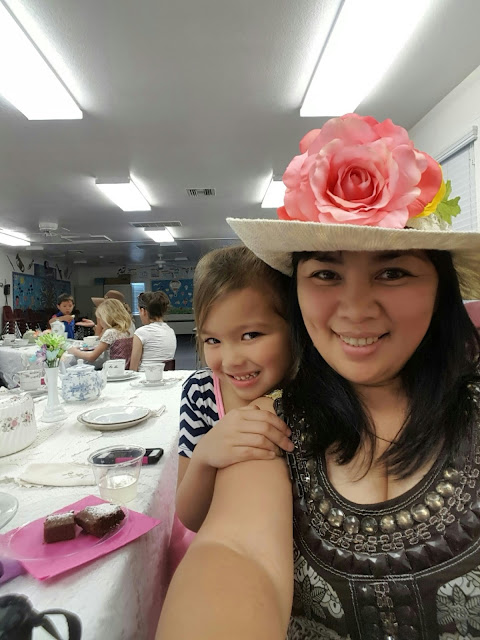 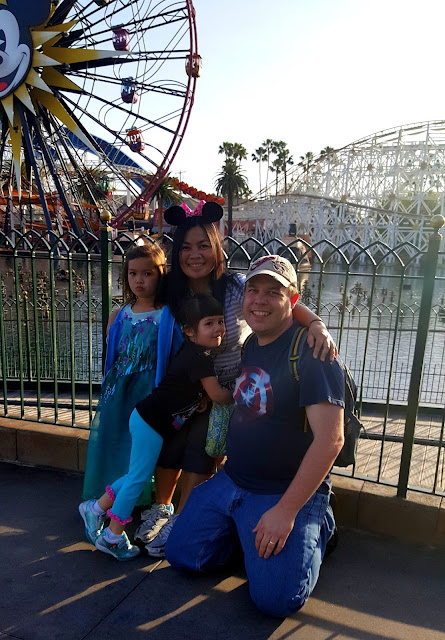 We are so blessed and privileged to visit and enjoy the "happiest place on earth--" Disneyland! It was a family affair like no other. Along with us were my husband's brother's family, and my father-in-law.

The little one woke up past three in the morning (not late, huh?), while her Ate woke up an hour later. The reminder the night before the big day worked!

The girls didn't have a clue where we're going. The older one already had some hints few days earlier. She was able to confirm that the place she guessed was right when we were already at the airport. Questions from people at the airport about the destination confirmed her suspicion. Her lips just spread so wide, her eyes stretched to the sides, then lit up!


Going to Disneyland by air was more of a breeze than traveling by land. The ride from Phoenix Skyharbor International Airport to John Wayne Airport only took less than an hour. Doing all the security process in the airport took longer than the flying.

The family stayed at the Desert Palms Hotel & Resort. It's a hiking distance to the Park. However, we opted to use the shuttle going to and fro. After all the walking and waiting in line at Disneyland, the shuttle was a practical choice. 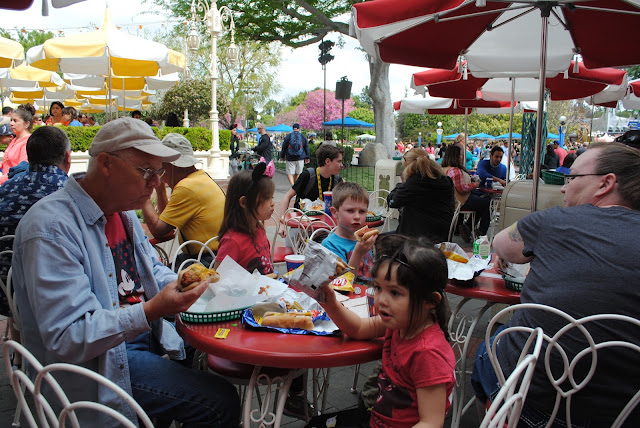 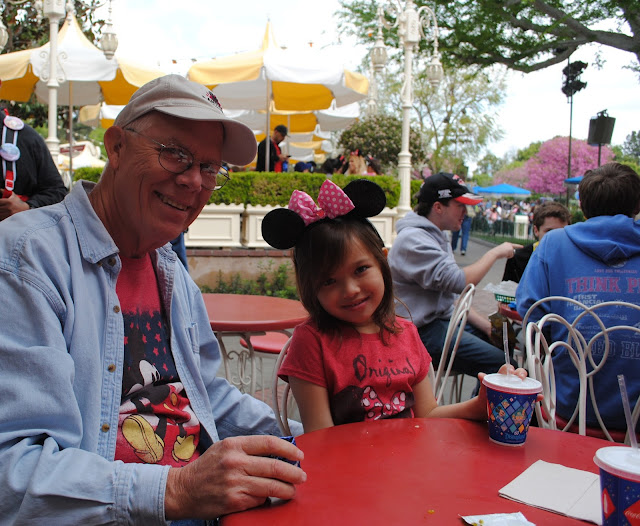 Right after we got to our hotel, we proceeded immediately to Mickey Mouse's place. First thing we had to do after we got inside was find a place to eat lunch. Everyone was hungry and had hotdogs! The pulled pork hot dog was actually yum! Glad I decided to go for it than just the regular, boring hotdog.

First stop ride was Buzz Lightyear Astro Blasters. I remember the girls didn't like this ride at Disneyworld because it's dark and noisy. But that was 2 years ago, things have changed. This time, it was a fun experience. We got "fast pass" for Star Tours which made me nauseous, I didn't go back the second time around. Other rides we did were Storybook Land Canal Boats, King Arthur Carousel, Alice in Wonderland, and Mad Tea Party. We still have a long day to go, but Evie was physically (and probably mentally/emotionally) miserable. She complained about her tummy and ear hurt. She was crying, ready to go back to the hotel despite the temptations of amusing rides. Her comfort and well-being are more important than any fun rides the Park offers. So, the four of us went back to the hotel.

Shower makes miracles! Evie took the time she needed in the warm shower. Alas! She was all better right after the long shower. The reasons we could think of why she was miserable were:
DAY 2 (March 14, 2016 - Monday)
Off to the Disneyland California Adventure Park on day two! Not as crowded as Main Disneyland, a big plus. Wahoooo!!!

The girls wore their Frozen Fever costumes: Evie as Queen Elsa and Fi as Princess Anna. Those gleaming eyes we see as they get ahold of their admission ticket to the park was priceless. 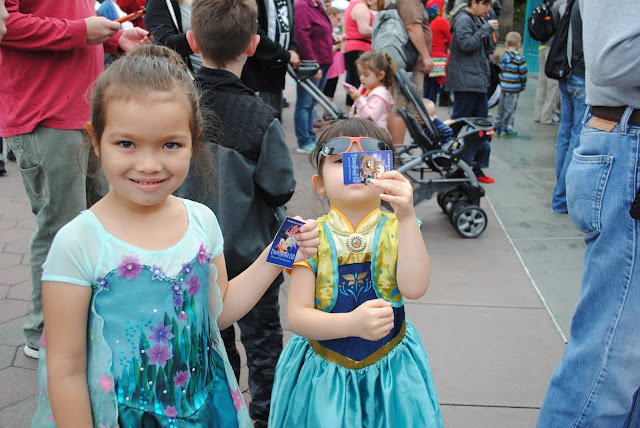 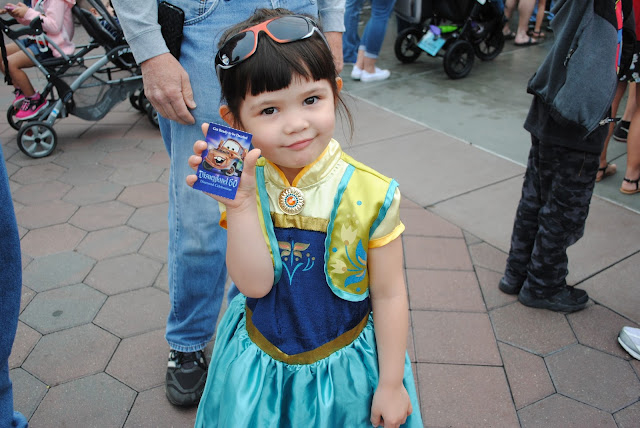 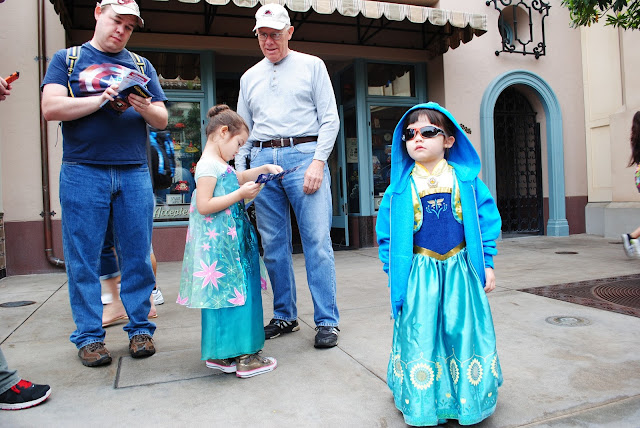 Fi was not in her best physically. She was running a low-grade fever, we brought with us fever relief medicine. We looked for a jacket to keep her warm from the cool temp and found a zip up hoodie from one of the shops. Hefty price tag was anticipated, but I was totally disappointed of how low the quality is of their merchandise. I honestly did not expect a "Walmart-quality" Disneyland jacket. No choice for something that was needed.

I took her back to the hotel few hours later to get a nap. However, she refused to doze when we got in our room. Went back to the park in the afternoon. She was feeling much better and more active. 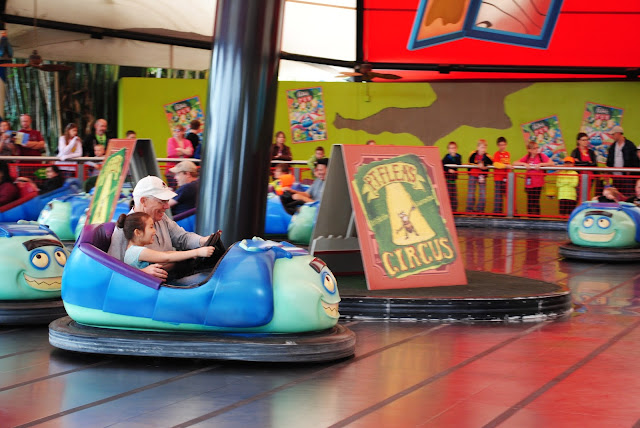 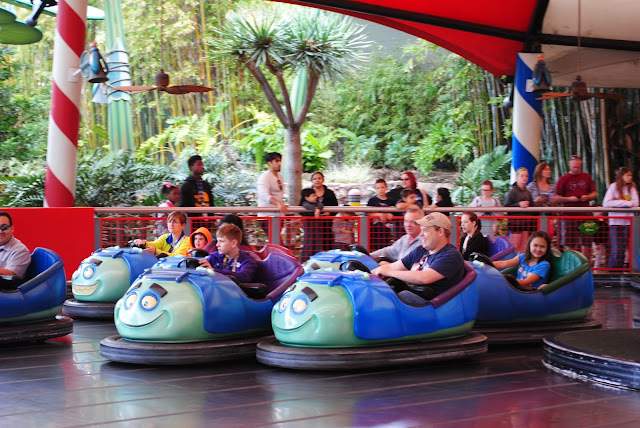 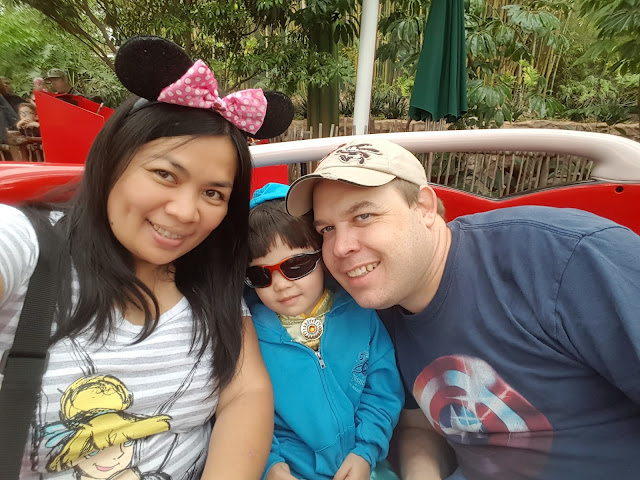 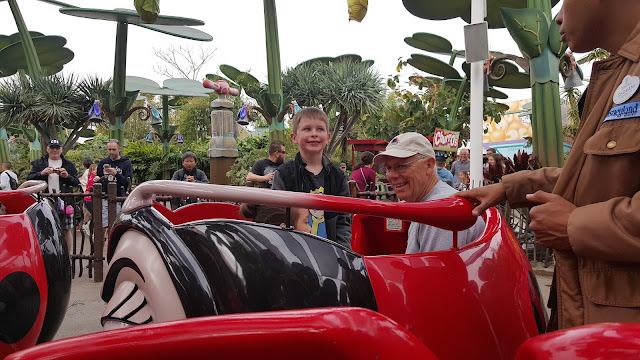 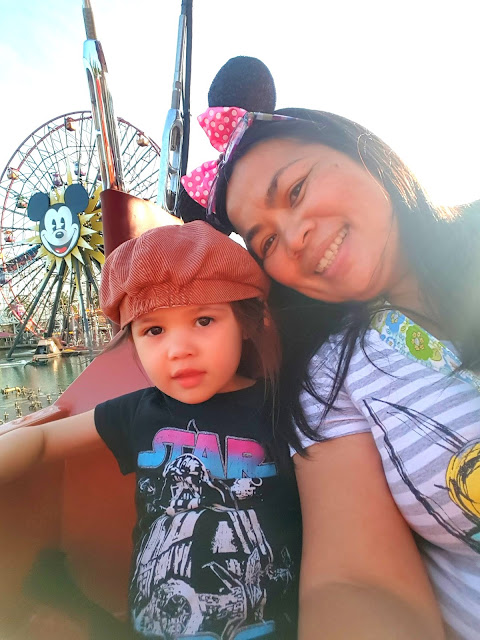 The Thrill of The Twilight Zone Tower of Terror

The most talked about ride of all -- Tower of Terror. Evie hated it so much. Funny how she talked all day long (even until days after)  about how she disliked the ride. I DO NOT LIKE it either. Don't think any in our company enjoyed being dropped on a dark elevator, several number of stories high. Shrieks was all we heard :) 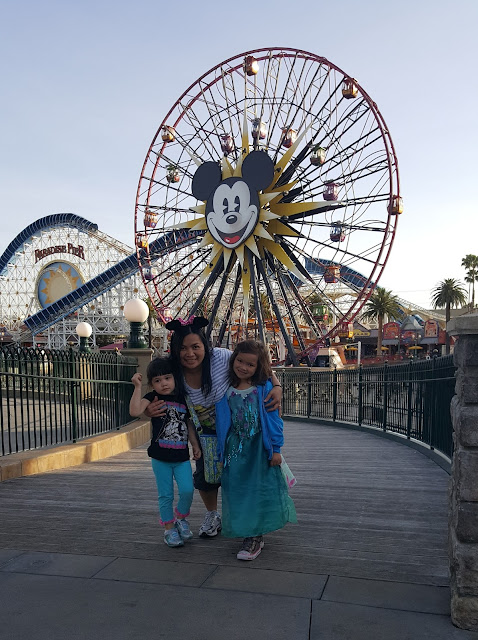 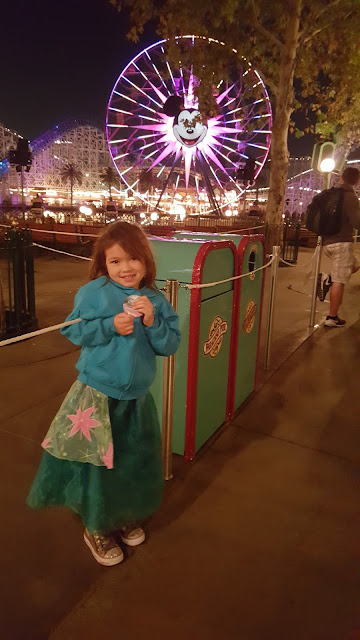 Eyes barely open, legs flailing from her Grandpa's shoulders, Fi was determined to stop walking on her own. The day was long, until her eyes captured a very familiar face that she adores -- Minnie Mouse! Oh how those eyes sparkled, her dimples unceasingly showed off. All of a sudden she forgot she was exhausted. Minnie Mouse is indeed a toddler energy booster. Felicia threw bitty bunny hops as Minnie gave this tot her full attention. Mickey's girlfriend was lavished with hugs and kisses on the nose. My little one couldn't get enough of her. The magical encounter was the highlight of her day.

The gang is back at Disneyland! Theme of the day for my two younglings is Star Wars. Evie dressed up as Rey, Felicia in her classic Princess Leia hair buns and sporting a Padme bodysuit.She's so cute in her hair, people couldn't get enough of their "oooohs" and "aaaaahs." For a toddler with energy like an Energizer Bunny, I had to fix her hair a few times. 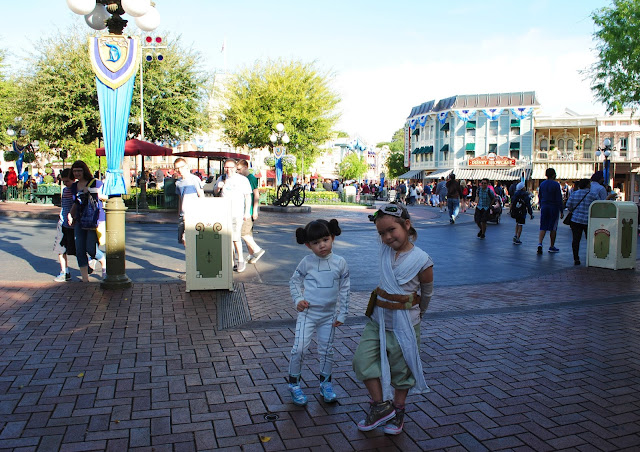 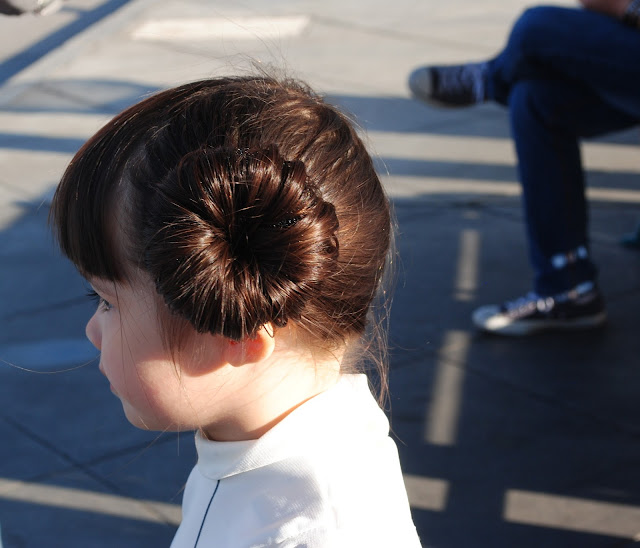 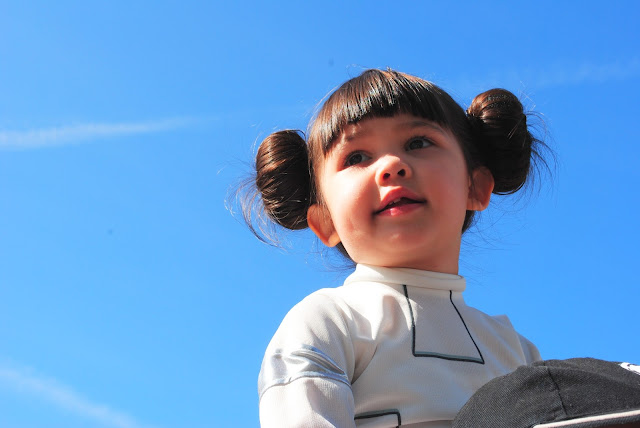 Disneyland Stormtroopers are elusive. They do not stop at every request for a photo huddle. They will when they want to. But they succumb to "the force" of our own Rey. The force was so strong in her, one Stormtrooper stopped and called her attention. "Hey you!" he hollered in his spacey voice. Oh yeah, the young Padawan's trick worked! :)
Posted by Riza at 5:06 PM No comments:

Even Superheroes Get Bored 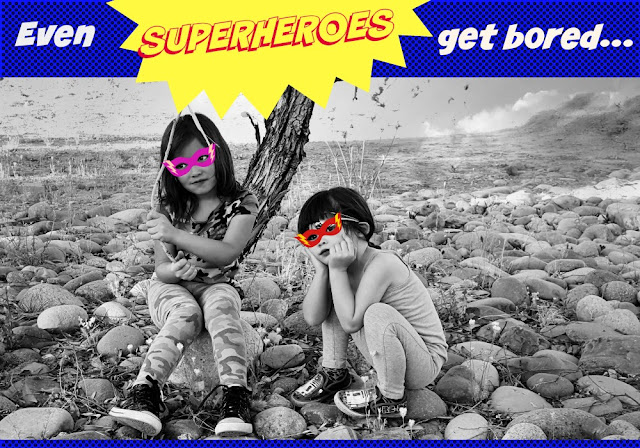 And the Winner is...

My morning starts with a great news straight from my inbox. Subject of the email says, "Winner." My suspicious mind tells me, "Here's another bait from scumbags!" But lo and behold, my mouth hangs open as I read the message at least three times, until I convince myself it's not a scam. A COMPEL Training staff informs me that I am the winner of the book myPhotoWalk - Quiet Time Moments by Catherine Martin! Oh, heaven rejoices with me! I ask myself several times, "Why me?" Of all the entries in the contest, why did I win instead of another girl who joined? I could not remember the time I won something out of random choice. I always thought of myself as somebody who never gets a slight chance of luck when it comes to contest such as this. However, I know something that happened the day I entered the contest. A simple, yet powerful gesture of faith: I claimed the book to myself. It was effortless. I did not pound my chest to God to give me what I want. I simply entitled myself to possess the book with faith in the name of Jesus. Then I stepped back and let Him do the work according to the faith I poured out.

I am reminded time and again that the word "luck" does not reside in the dictionary of my Father God. I am not lucky. I am BLESSED!

My Father has His own reason why of all the names randomly selected to get the book, He specially handpicked mine. He is sending me a message. He knows how I love writing and photography. He planted it in me. I should not be surprised of what He knows about me. After all, He is my Father. Yet, obvious divine intervention like this helps open my eyes to the reality of how much He thinks and plans my future. I can only pray for help to do His will for my life. 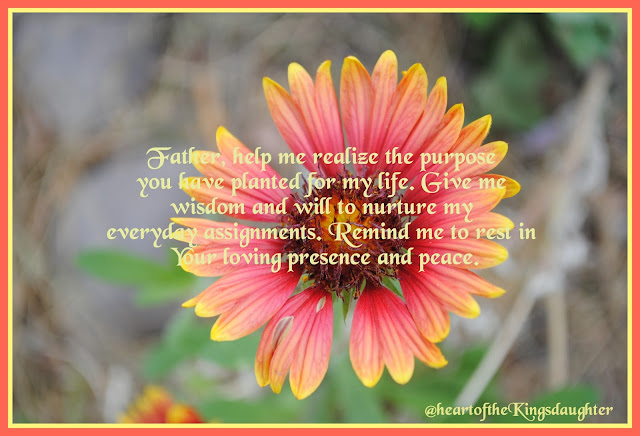 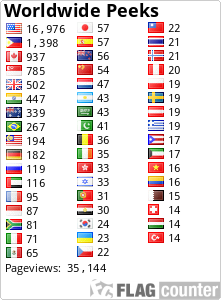 
This blog is a personal blog written and edited by me. For questions about this blog, please contact Riza (eulariza at gmail dot com).


This blog accepts forms of cash advertising, sponsorship, paid insertions or other forms of compensation.

The owner(s) of this blog is compensated to provide opinion on products, services, websites and various other topics. Even though the owner(s) of this blog receives compensation for our posts or advertisements, we always give our honest opinions, findings, beliefs, or experiences on those topics or products. The views and opinions expressed on this blog are purely the bloggers' own. Any product claim, statistic, quote or other representation about a product or service should be verified with the manufacturer, provider or party in question.